Around 9:30 pm I returned home after taking 6 of my scouts–the elected officers–on a training cruise on the Chesapeake Bay. We sailed from Baltimore to Annapolis and back, with Captain Nichols on the first leg and Commodore Alexander on the second. Mr. Longhi, the second adult leader from our ship, was also with us for the weekend.

I had spent the previous several days pulling together a training program and detailed plan that even spelled out expected arrival and departure times for the 8 stops–for training cruise errands and picking up scouts–I would make before hitting the highway 2 hours later. My agenda fluttered around the room when, 2 days before the training weekend began, Captain Nichols informed me that he needed to split duties with another. He said the best way was to sail from Baltimore to Annapolis, switch Captains there, then sail back to Baltimore on Sunday. Six hours of sailing/motoring each way posed a challenge to executing the training program. Not to mention, that could mean the expense of about twelve gallons of diesel (at about $4/gal), plus a mooring in Annapolis for overnight, so about $65 additional cost, and I feared we were already over budget. Given that preparations to this point had resulted in being stretched too far already, I could not afford much energy for worrying, so I let it go and trusted all would work out well in the end.

Day one: Friday 3 October 2008
Stayed at dock. I talked to Commodore Alexander and another area Skipper–exchanging cards and enthusiasm about sharing petty officer training materials–while the Boatswain led the scouts in settling in, stowing gear and provisions, conducting boat orientation, and pre-sail systems checks (water and fuel tank levels, battery water level, engine oil and belt inspection, etc.). The training program started with a review of Captain’s rules, and went on to units on effective communication, leadership roles, networking and more. Scouts Rebecca and David provided some of the program, respectively covering command/response, and points of sail and knots. Mike Longhi conducted a very insightful training session on handling resistant people.

Captain Steve Nichols joined us late afternoon and shared our dinner, which consisted of a rice stew based on a recipe from Ship 1942, but using ham instead of chicken. I dubbed the concoction “Sea Scout Stew,” and the scouts made jokes about finding one of their number missing.

Day Two: Saturday 4 October 2008
Reville at 0600. Cast off just after 0800. The marina was packed due to the Fells Point Festival, which limited maneuvering space, but our captain came up with an excellent plan, briefed the scouts and executed the maneuver–which included backing der PeLiKanout of the marina–like an expert! Captain Nichols is also an expert when it comes to history. Surely, there is no regional event, historic figure or site that he is unable to tell about!

The scouts rotated through watches at helm, navigation, and look out as we sailed and motor sailed toward Annapolis while treated to the sights of many vessels, including a barquentine, a  3-masted schooner, two rowing cutters with female crews, and a distant view of the liberty ship John Brown–aboard which were the grandparents of one of our scouts.

We lowered sails when the wind died in the early afternoon and motored into Annapolis, hoping to find a slip. However, due to the impending Great Schooner Race and sailboat show, there were no slips or moorings available, so we anchored out. Captain Nichols needed to shop for birthday gifts for his wife, so took the water taxi into Annapolis while we stayed aboard for more program, covering the Handbook for Members, and starting to delve into program planning. It was a shame we could not go into Annapolis, too, but if you have to sit through training, it may as well be on a beautiful day aboard a great boat.

The Captain came back in late afternoon, happy with his purchases, and we broke from training for card games and dinner preparation. Daniel and I made taco salad, we had our meal together, and I planned for more program in the evening, but Commodore Alexander came to take the Captain’s place, and his agenda threw mine into the water. Literally!

By the time our replacement captain arrived, it was close to 8pm. But a sea breeze was blowing at 10-15 MPH, and the captain, fond of good and spontaneous things, asked almost immediately whether we wanted to go sailing. The enthusiastic, unanimous response was, “YES!” Night sailing! Our first!

We spent 2 hours sailing from Annapolis to the Chesapeake Bay Bridge and back. The wind was brisk, the stars and silver of moon overhead, almost no other boats were out, and we felt deliciouslywild and free! This was definitely the high point of our weekend, an experience we will long remember.

Day Three: Sunday 5 October 2008Heavy fog obscured the sun and made unsafe travel conditions, so we listened to the Commodore clang the bell for 5 seconds every minute and waited for the sun to burn off the fog. Meanwhile, having a breakfast of sausage gravy and biscuits–that I cooked under Commodore Alexander’s direction–and morning colors.

The Commodore, ever thinking of fun and interesting ways to share his vast maritime knowledge, offered to show us how to raise anchor “under sail.” Dead air made the reality “without engine,” but it was fun to learn, through real life application, how to use the weight of the crew and the length of the boat to leverage the anchor from the bottom. Once free of our tether, we motored and sailed back to Baltimore, listening to the Commodore’s stories, soaking up his knowledge, and even hearing a sea shanty or two. Aside from stopping for a desperately needed head pump out–liquid was squirting out of the vent hole–we had a happily uneventful run back to Baltimore. There, the Boatswain led the scouts in cleaning der PeLiKan, while I ran off to take a shower, feeling no guilt, as I had spent a significant portion of the day cooking breakfast, preparing part of lunch, and cleaning dishes and galley.

A stop at McD’s for provisions, another to drop Rebecca off at the appointed meeting place with her mother, stopping at the commuter lot to switch vehicles again and give David back to his mom, a trip out to Daniel’s grandparents to drop him off with his dad, and finally, back home, where we had a trunk full of stuff to unload before bed.

This was a great trip! The scouts and I learned a lot. They are going to be fine leaders, and will one day realize they have Sea Scouting to thank. 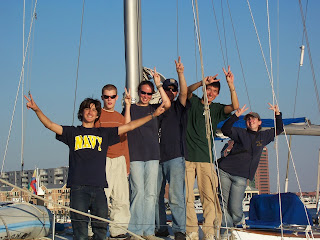 This entry was posted in Sea Scouts and tagged Leadership. Bookmark the permalink.