Winter Training for the Skipper 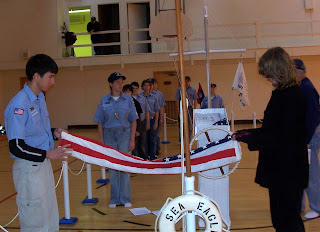 Sea Scout Winter Training is a weekend of intensive learning, mostly in the classroom. However, human beings are hard wired to learn best from practical experience, and this is how I gained my most valuable lessons during that time.

The first thing I learned is “Never assume that a favor has no potential for hidden strings.” This came immediately upon our arrival, before I had even checked in our ship. National Capital Area Council Squadron Commodore Doug Yeckley was waiting for me, to offer our ship the honor and obligation of providing the landship ceremony for the upcoming Northeast Regional Bridge of Honor and Sea Scout Ball. The proposition was so unexpected that my initial response was probably mute, with  rapid eye blinking. The Commodore noted that there were some strings attached to his giving my scouts their winter blue- and summer white dress uniforms, and he was pulling them. Oh. Okaaaay. My scouts have had virtually no drill training, only participated in one very simple landship ceremony, and had responded negatively to witnessing the one conducted as a bridge of honor at last year’s training. Great. “I will have to ask my scouts,” I told him. My ship is about what the scouts want.

Some of my teens were interested, others not so much, but most agreed to try out the “just for us” landship ceremony instruction held in the gym by Commodore Yeckley and George Kain, skipper of ship 25 in Yorkshire, PA. We ran through the ceremony twice, and at the end I felt some hope. My scouts had shown willingness and improvement. After their experience, having time to think about it and consult with their parents regarding cost and time commitment, we have 5 scouts committed to the event, and one whose attendance depends on her as-yet-unknown school schedule.

When I looked at the regional event’s Boarding Manual, my first thought was, “Oh, great, a lot more work for the skipper,” and it is, but 6 of my scouts want to do this enough to make a serious commitment. One of them, a rather shy girl, has recognized that she likes drill, and has offered to help coordinate the training. It is a pleasure to see her stepping out of her comfort zone and into a leadership role and I look forward to seeing where it takes her. We will have to be committed to training, to excellence, to financial investment (approx. $65 each person, plus travel expense), to travel, to plenty o’ paperwork, and to attention to numerous details, but I believe we have the quality crew that can do this, and that somehow all will come together to spell “success.”

The second big lesson I learned at Winter Training was, “A person is not necessarily a genuine leader- or even true to their word if they try to convince you of that when you first meet them.” This one came over the course of two nights in the cabin my female scouts, Mate for Administration and I shared with females from 3 other ships. A woman in that group presented like she was in charge of the cabin, and noted that she is a bit lax on enforcing lights out, but does tell the girls to quiet down if others are trying to sleep. I took her word for it, because I generally take people at face value unless they have given me reason to take them otherwise.

The girls from the newer ship were friendly, and invited my girls to join them in a card game. Girls from the other ships were a bit stand-offish and even a little snotty. This gave us reason to believe it was they who moved Rebecca’s items from the bunks she had reserved for her shipmates, and later moved her things to a cot. Their mindset was also reflected in the signs posted on the footboards of their beds, marking their territory.

My girls made note of this rude behavior, but we all felt it of little consequence beyond an illustration of a lack of character. However, the woman “in charge” neglected to keep her word regarding quiet time, and that affected our ability to sleep. I decided this was not going to happen a second night.

When we came back to the cabin from the evening’s activities, a boy was in our room, sitting cuddled with his girlfriend on a bed, where other girls and the woman “in charge” were also sitting, gabbing, playing cards and laughing. My cell phone was not working, so I did not know the time, but was sure it was past the start of quiet time. Still, I let the activity go on for a while, while my crew readied for bed. I put the sheet on my bunk, rolled out my sleeping bag, brushed teeth, etc., but purposely stayed dressed in my skipper’s uniform.

The noise rose and fell; these young women were clearly not intent on keeping to Winter Training rules. All of us needed to get up and go to class in the morning, and we all had to be packed up and gear cleared out before breakfast, so I strode out to the bedside and asked, “Does someone have the time?” Miss “in charge” said, in a tone much like a smart alec adolescent, “Quarter after.” I asked “after what,” because I did not know. She said it was after 11 and I asked what time quiet time starts, and she said, “Eleven-thirty,” which I knew was wrong. I went to the schedule posted on the bulletin board and noted it had begun at 2200, or 10pm and lights out was at 11:30. “So, it is quiet time, ” I proclaimed, “and some of us are trying to sleep, so I would appreciate it.” Then I went back into the little room I shared that night with Mate Enright, and noticed that the main room quieted down quickly.

Given the other ships’ behavior, my crew and I expected that they would shirk their share of the clean up, but we were pleasantly surprised to find they had done it all. Perhaps it was out of fear that Skipper Meanwoman would report them if they did not, that they were already in trouble and did not want more. Whatever their motivation, I appreciated their cooperation.

However, I had already done some deeper thinking on the subject. After returning to my bunkroom the second night, it struck me that, because there are so few female skippers–and none apparent in the other ships present at Winter Training–I outranked all of them, and, oh, hey, because of that, my girls and I don’t have to put up with any guff from anyone. I am not power hungry, and I do not look for opportunities to pull rank on anyone, but when people are disrespectful, particularly if in ways that have a negative effect on my scouts, I am going to do something about it. From now on, when we bunk with other ships, on introductions I will clearly state that I am Skipper Seaborne and a stickler for the bunkhouse rules. I will even carry that over to the guys’ side of the cabin building. I don’t mind being The Meany if it means my scouts get the sleep–and respect–they deserve. The respect anyone deserves. 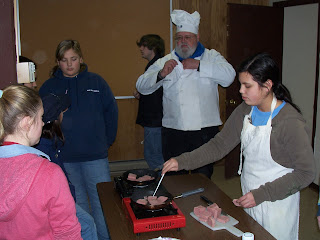 Not all my learning was the hard way. Being that I had taken the leadership track last year, I was free to take more enjoyable courses, like Ground Tackle, Electricity, and Scout Prepared Meals Aboard (SPAM). The instructor of the latter was Commodore Alexander, who always makes it fun. He ended the talking with a hands-on application, in which the scouts made SPAM® and biscuits before having a PBJ making contest. Despite my sharper instincts, I actually ate a SPAM® biscuit, and as I bit into it, I heard words from another adult, words that expressed the thought in my own mind, which was, “I can’t remember the last time I ate SPAM® .” Yes, it tasted the same, though this was the low-salt version , so it was, indeed, less salty. This means it will be a long time before I eat the stuff again. Another lesson learned.

Perhaps our not-so-kind cabin mates learned a lesson, too. Since they simmered down after my single warning, I let everything pass without further comment. For their sake, may the lesson they learned be, “Treat everyone politely, for, at the very least, you might not know exactly with whom you are be dealing.”

This entry was posted in Sea Scouts and tagged Leadership, Learning. Bookmark the permalink.