Capt. Ashton was planning to have this weekend be just orientation for a gaggle of captains, but since two of my scouts wanted to sail, I talked him into making the regular Saturday Sail a go.

It was the first sail for two scouts, and the first “real sailing” for the 3rd. We also had a third adult on board, a captain-in-training. Capt. Finn covered a lot, using the at-the-moment situation to teach pertinent sailing theory in a real-life setting. We hove to, reefed the sail, tacked and gybed.

The wind was stiff, so we actually needed to reef the sail. Had the boat heeled, scouts nervous, skipper hollering “YEEESSSS!” and smiling her thanks up to the sky. We were out about 30 minutes longer than scheduled, then headed up to the boat yard.

One of my scouts had asked me if there would be service hour opportunities after the sail. I hadn’t planned on it, but because he asked, I set it up. Several phone calls and emails later, we had a total of three scouts wanting to work, and another Youth Protection certified adult.

The three scouts took turns with power washing the cutter-rigged MacGregor 23, helped clean out the Venture 21, helped take out sails to dry, fold sails and put them away, and straighten out a massively tangled anchor rode. After the first hour, we were hot and tired, and one scout suggested using the power washer to create a cooling mist, which we all–even the dog–enjoyed. The scouts impressed everyone with their effort, and they were a real help with the boats.

As I was waiting for a sc 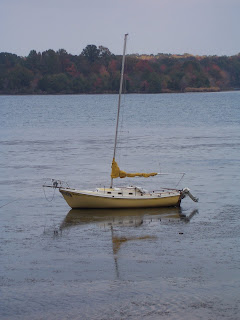 out’s parent to arrive, Capt. Ashton and Capt. Reynolds showed up, ready to replace the halyards and step the mast on the brightly clean MacGregor 23. The scout and I helped with the halyards while he awaited his ride, but he had to go before the mast was stepped. I had never helped with or saw this before, but was ready to lend a hand, starting with reinstalling the spreaders and attaching the spreader boots, then pulling the rope attached to the forestay to raise the mast, and, finally, being the one with the wherewithall to get the mast aligned just right. I believe I averted disaster at least once. Things were a little hairy there for a few moments, but we did it! A sailboat always looks nicer with a mast.

Kudos to my scouts for how fast they learned, how well they listened to Capt. Finn and Capt. Danny, and the excellent work they did in the boat yard. Their interest- and ability to apply themselves made my effort to organize worthwhile. I hope we do it again soon.

In the meantime, I hope the practice those knots, start learning points of sail, and the parts of the boat–so they can be in good form and candidates for the long cruise. More kids on more boats!

As for me, after 8 hours of sailing and working on boats, I’m bushed, and heading to my bunk. zzzzzzzzzzz

This entry was posted in Sea Scouts, Uncategorized. Bookmark the permalink.