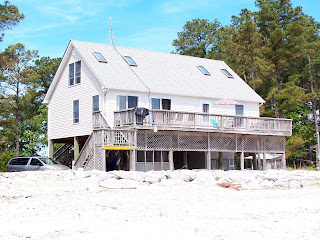 The invitation for 2 days of R&R was unexpected, but greatly appreciated, as I was in much need of a little break from my usual demanding routine. Respite came through approximately forty-five hours at a beach house on stilts planted upon a spit of land between the Chesapeake Bay and a branch of St. Jerome Creek in southern Maryland. Hardly was I out of the car before I committed to a kayak paddle around the creek while the kids unloaded the car and tended our dog. My companion and I went up a small, narrow creek that borders the back of a long row of eclectic houses, some well kept and others hardly more than shacks with boats so long ago sunken and rotten that they were the ro 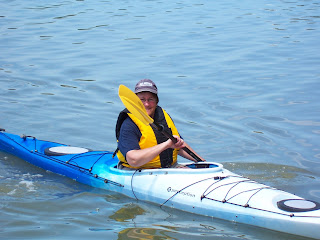 There, we encountered a man who was proud to show off his homemade stainless steel rotisserie barbecue, noting that he had fitted it with a 12-volt motor, so he could carry the contraption on his pick up, draw power from the battery, and “barbecue 500 pounds of beef while driving down the road.” Until that point in the conversation, I had only listened, but that surprising thought caused me to exclaim, “That is awesome!” I meant it wholeheartedly, even though I could not think of a reason one would want to simultaneously cook and transport beef while driving a truck. We went on to the end of that little creek, and back out to the larger branch of St. Jerome, all the way up to Buzz’s Marina before going back to the house, where I needed a rest.

The house filled up with our host’s relatives, and everyone was nice to us, spoling us, even. The steak for dinner was perfectly cooked on the grill, and accompanied by fresh corn on the cob and a lovely salad. We rounded out the evening with various beverages, plus Laurel’s delicious lemon bars, which survived transport with only the smallest dent.

Four of us stopped in at the Sea Scouts’ Henry I. Nygard Regatta, an annual gathering, where scouts compete in tests of skill and knowledge, like the Powder Monkey Race, heaving a line, and canoeing. I talked to a few of the more seasoned leaders, and came away with assignments to share pictures and make phone calls. A skipper’s work is never done! 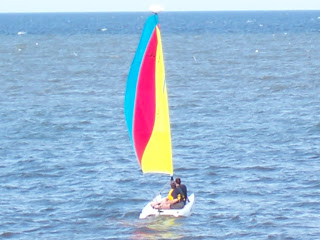 Caitlin sailed with me in the Hobie “Bravo,” and both girls went out with me in the personal water craft. We also napped, ate a bit of chocolate, watched the sun set and rise, joked about 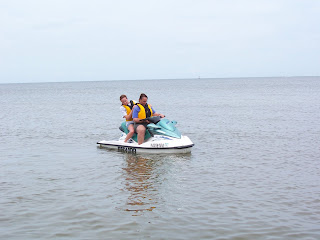 buying the lighthouse, and conversed with different people on various subjects.

I calculate that during the two days kayaked almost 4 miles, walked 3 miles, sailed for several miles, drove a personal watercraft over choppy water for a few miles.Forty-five hours at the beach for “rest” and I so wore myself out that I was good for nothing on Monday and needed a couple of days to recover from my vacation. But, gosh, it was nice!

This entry was posted in Adventure. Bookmark the permalink.