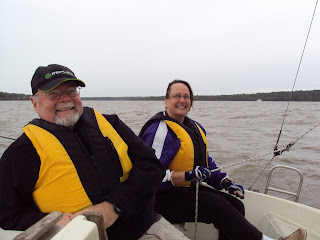 rted off prickly. Serious communication glitches in the Saturday Sail coordination process caused me to spend 20 minutes and however much gas to drive down to the dock, only to find no scouts, and no captain. I was more than a little sore.

This, on top of other recent challenges, had me spitting vinegar and feeling the urge to do something rash. I tried to calm myself by sitting in the cockpit of the O’Day 21′, absorbing the sensations of the river. My eyes took in the glowering blue and gray clouds, which were punctuated by stripes of orange and yellow to the east. I tuned into the pleasing touch of the wind as it blew over me, and I watched it toy with the surface of the water, sending bands of ripples across the river. The boat gently rocked and the river smelled delicious, but still, my agitation persisted. I was steaming! This is a very rare condition for me.

I put in a call to Capt. Danny, who said there was a small craft warning, with winds 15 MPH and gusting to 25 MPH, so it was not a good setting for taking out scouts, anyway.

Danny knows how I love speed, love spray, love a heeling boat and the sound of water rushing past the hull. He also knows I’ve been under serious Sea Scout Stress since at least July, and that I haven’t had much opportunity to sail, much less, sail the way I really love to sail. So, he said the magic words that turned my gloom into glory. “Let’s you and I go out! It will be screamin’!”

I laughed with delight, told him yes, yes, yes, let’s go and how fast can you make it down to the dock? He said he’d be there, with coffee, in about 30 minutes. I felt a little better already.

A few minutes later, a familiar face came down the gangplank. It was Kevin, parent to one of my scouts, and soon to officially become my new Mate for Program. He will be the adult leader on the Saturday Sail coming up in two weeks, and said he came down to the dock to see how we handle things, just to become acquainted with the set up. I told him the official Sea Scout sail was canceled due to small craft warning, but that Danny and I were planning a ripping good sail, and I invited Kevin to join us. He agreed–not having any real clue what he was in for–and I began showing him how to prepare the boat.

Kevin and I removed the sail cover from the main, hanked on the Genoa jib, ran the jib sheets through the fairleads, tied the stop knots, and attached the halyards to main and jib. By the time Danny arrived, with dog Trina, we had the boat ready.

The plan was to head south toward Possum Point power station, then come back up the river. We did that, motoring out, then, with me at the helm and main sheet, stopping to point into the wind and raise the sails. With the wind behind us, we headed down river on a broad reach, with Trina down below. The wind was stiff, and the volume of the Genny posed a challenge. In executing a gybe, I found myself with the sheet fully played out, stop knot at the cam cleat, and the leeward rail–and part of the deck–under water. I was soaked half way up my back, eyes staring incredulously at the knot. I don’t recall what I did in response, but it was the correct thing, as the boat righted and I regained control. Danny and I howled with laughter and hooted, while poor Kevin probably thought we were nuts. The experienced captain had been standing in the companionway and noted, “I was standing on the starboard bulkhead, on the port lights!”

I steered the boat up the river on another beam reach, constantly adjusting tiller and sail to meet the tricky conditions posed by the wind and waves. The wind had now whipped the water into sturdy whitecaps, and waves of them regularly rolled toward our beam. I had to tune carefully into the boat, sailing by the seat of my pants, responding to the shifty wind by adjusting the sail and tiller while trying to also take the waves on the port bow quarter rather than broadside. It was quite a workout, but I loved it!

After about an hour and a half, on the other side of the river, Danny decided we should swap the Genny for the regular jib, so we changed course and headed up Mattawoman Creek for a little shelter from the wind. Coming past a point on the creek, we touched bottom and narrowly missed running aground. Finding the wind much softer–about a “normal” sailor’s speed–we anchored in the shelter of a leeward shore, taking a few minutes to rehydrate and rest a bit. A check in with Kevin revealed he was having a good time, and not really afraid.

Danny showed Kevin how to swap jibs and explained why the Genny was overqualified for today’s wind, while I sent a quick txt msg update to my Facebook page, “Ha ha! Capt danny said ‘let’s go!’, and i said ‘yeaahh!’, so kevin is getn hs 1st sail, and it’s a screamer! Woohoo!”

Trina sat in the 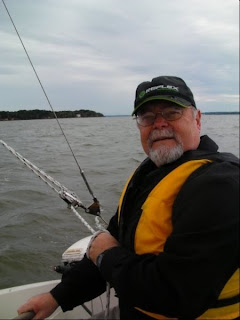 v-berth with her head poking out of the hatch, grinning. That dog has come a long way since Danny adopted her! Back in the spring, Trina was nervous about even walking down the dock, and now she has, as the Capt. put it, “over 100 hours of sail time, which qualifies her for a captain’s license!”

Soon, we had raised the anchor and were on a close haul back down Mattawoman Creek, in a stiff breeze and wondering just what was in store for us out on the open river. What we found was perfection! Under the new jib, the boat was much easier to control, and the wind had calmed just a little, so the work aspect was gone, leaving just sheer pleasure. I asked Kevin if he wanted to take a turn at the helm, and he bravely agreed. Kevin asked Danny where we should go, and the seasoned captain pointed upstream, where the river widens into Occoquan Bay, saying, “let’s go over there, where there are some whitecaps for Shay.”

By then our aim was to head back to the dock, so we sailed close hauled, as the wind was coming from the general direction of the dock. Kevin did an admirable job of keeping her pointed up as we took a few long tacks toward Virginia, but his inexperience cost us headway, so Danny suggested I take the tiller for our last leg. I was glad that I did, for the conditions then were about as perfect as could be. There is nothing like sailing close hauled in stiff wind, with an occasional gust for spice! I had the leeward rail almost buried a couple of times, but careful tending of the main sheet and tiller kept the boat dry as we dashed across the waves. Capt. Danny kept glancing over at me and exclaiming, “Look at that smile!” I know I haven’t looked- or been happier in a long time. Ahhhh, bliss!

Finally, actually having had enough after about 4 hours of “screamin'” sailing, Capt. Danny decided it was time to point into the wind, take down the sails, and motor in the last bit. He and Kevin brought the sails in and tied down the main while I handled the tiller and motor. As we neared the dock, Danny took the helm and brought us in to a perfect and gentle docking. Trina jumped ashore and we put away the boat, headed toward our cars, and I thanked Danny for about the 3rd time. Alas! The rapture was over. But my smile…it will last for days, and it will reappear in those moments when I think back on this sail and remember there were “whitecaps for Shay.”

This entry was posted in Uncategorized. Bookmark the permalink.

2 Responses to Whitecaps for Shay