I spent the past four days aboard the Sea Scout Training Vessel der PeLiKan, the Morgan 46 ketch that serves as the centerpiece of the Chesapeake Flotilla’s training program. Our crew consisted of Commodore Doug Yeckley and two of his scouts from Ship 548, named Brenda and Becky; Keith, a former Sea Scout turned an adult leader, from Ship 548; scouts Rebecca and Emily from my own ship, and myself.

We prepared the boat for her recommissioning cruise and headed out of Baltimore around 1700 (5pm for you landlubbers). With wind coming from the south–the direction of our travel–we had no opportunity to sail, so we motored along. Heading into the channel at Kent Narrows after darkness fell, we felt our keel bump the bottom a couple of times. I’m still amazed at how well the crew can feel even a little bump, especially on a vessel of der PeLiKan’s size. Our vessel arrived at the drawbridge at 2108 (that’s 9:08pm for you landlubbers), and discovered that we had missed the last draw of the day by 8 minutes. (That’s 8 crumby minutes for you landlubbers!)

Our options were to go around Kent Island, which would have us motor through the night, or spend the night anchored by the bridge, then pass through when the operators returned in the morning. We opted for the latter, set anchor, chatted for a while, then hit our bunks. Finding the cockpit seat pads too hard for my taste, I slept in my customary bunk in the passageway beside the engine room. Little did I know it would be one of the worst nights I’ve had in months. Oh, the nightmare!

Normally, I sleep very well when I’m aboard a boat, even though I remain in tune with the environment, and wake briefly when the wind shifts or another significant change occurs. When I do wake, I note the change, then close my eyes, think I’m on a boat!, and smile myself back to sleep. Not this night!

With the bridge looming nearby, I dreamed that the anchor slipped and the tide was pushing us rapidly toward the bridge. Alarmed, I woke, swinging out of my bunk and up the ladder to check. Having left my glasses at the bunk, I squinted into the night, finding a point on land to fix my gaze, using it to gauge whether we were actually drifting. Relief! No, no drifting. The anchor was holding, even in the strong current and breeze. However, the dream had sparked my concern. What if the 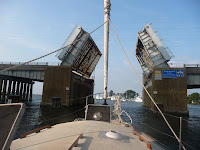 anchor were slipping? What would I do? Would I be able to start the engine and drive the boat to safety while rousing the crew for assistance? I decided I would, and I went back down to my bunk to fall asleep…and have another dream.

Groups of picnickers dotted a steep, sunny bank next to the water. They were watching us as…suddenly, der PeLiKan sank into the mud up to the top of her keel. It was as if she had been pushed into the mud by two great hands from the sky. The people on shore were pointing and laughing at the grounded vessel and those who were supposed to be in charge of her.

I woke in alarm a second time, and, again, went above to check that nothing was wrong. Red Eye’s bar had shut down for the night, and all was quiet, save the hum of traffic crossing that nearby bridge. Back down to my bunk, where I fell asleep…and had another dream.

Commodore Yeckley was at the wheel, with engine in full reverse and der PeLiKan’s bow jutting over the edge of the waterfall! I couldn’t understand why she wasn’t backing up, so I looked around for the problem. When I spotted it, I yelled back to the helm, “There’s a line from her bow to the other side of the waterfall!”

As silly as that scenario was, I woke a third time, and again checked to make sure the boat wasn’t in danger. My fourth waking of the night occurred when the boat swung as strong tide changed, and once more, I went above, just to check. No more nightmares, though. Thank goodness. It seems the Kent Narrows Drawbridge Fever had broken.

In the morning, we readied the boat, the drawbridge lifted, the Commodore piloted der PeLiKan through the channel and we went on to St. Michael’s without incident.

This entry was posted in Sea Scouts and tagged Sailing, Sea Scouts. Bookmark the permalink.

1 Response to A Skipper’s Nightmare