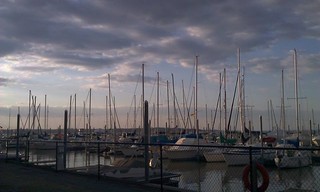 Morning at the marina.

The weather was as mixed as my feelings about the trip. When I arrived at the marina, it seemed the clouds were breaking up as the sky grew lighter, but instead they hung out longer than we hoped. The first half of the day was overcast and chilly. I wore five layers on top, with a pair of jeans below–and sometimes wished I had worn long John bottoms, too.

However, as early afternoon rolled in, the clouds gradually thinned, until the mostly sunny sky made each of us smile in gratitude for the warmth and light. 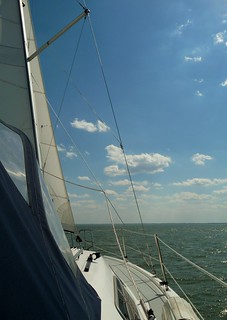 The mostly sunny sky made each of us smile in gratitude for the warmth and light.

Ray, Ken, and I took turns at the helm, motoring, sailing and motor-sailing as conditions warranted. Winds varied from 2KT to gusts of 30KT. For a good long stretch, winds were 16-17KT, punctuated by the 20-30KT gusts, which kept us on our toes. A particularly memorable moment was when the first 30KT gust hit the boat, while I was at the helm. PIXIE DUST rounded up [headed into the wind] so fiercely that it was as if she had a mind of her own. Though I had the helm hard over, it made no difference. I had never experienced that boat heeling over so hard, and was glad that I had thought to set down my mug of hot soup a few minutes before.

Another unique experience on this transit was having to avoid the numerous gill nets set to catch striped bass and white perch. These were laid in rows generally perpendicular to the shore, bearing small marker flags that were difficult to see. We wanted to avoid hitting them, particularly when the engine was running.

Ken had prepared a detailed itinerary that noted times that we should have been meeting particular marks, like the 301 Bridge and certain buoys. Sometimes, we were a bit ahead of schedule, others a bit behind, and Ken occasionally cranked up the engine RPMs to keep us on track. His son, Mike, drove down to meet us and was waiting to give a hand as Ken deftly backed the boat into her temporary berth. 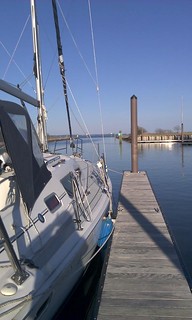 While Ken and Mike tended to a small problem with the “land yacht,” Ray and I gathered gear and bags to put ashore, put covers on the electronics, and prepared the electrical for hook-up. Soon, we were on our way to a bountiful dinner at the local Driftwood restaurant, filling up on iced tea and seafood.

The original plan was to take PIXIE DUST to her final destination and turn her over to her new owner the following day. However, the forecast  for Sunday’s weather had changed, portending a “not fun” kind of day, so Ken decided to postpone the second leg until the following weekend. I am hoping it will work out for me to assist then, as well, but I may have already had my last time aboard PIXIE DUST.

Ken and Deb have owned PIXIE DUST for nine years, enjoying many fine adventures. They have been kind enough to invite me on several jaunts and races in the past three years, giving me many a wealth of happy PIXIE DUST memories that I will long recall with pleasure.

This entry was posted in sailing and tagged Adventure, Happiness. Bookmark the permalink.