When pinched for time, slow down 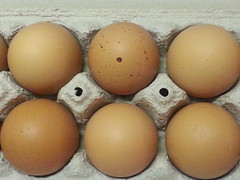 I was running late for an appointment in another state, and realized there was no way I could make it on time. Not even close. Instead of stressing and trying to get there as fast as possible but still failing by at least half an hour, I decided to slow down. Slow down instead of speed up.

My route brought me to a farm market that I had passed many times in the dark when it was closed. This was the first time I had seen it open, so I pulled over. Lured by the signs proclaiming southern peaches, local tomatoes, eggs, asparagus, mushrooms, and honey, I thought I would stop and buy something to bring to my friend Jean, who is letting me stay at her house for a few days while I’m ashore. I wandered about the little store, appreciating the beautiful fresh produce and local goods, and settling on a dozen local free range organic eggs, and some of the most beautiful peaches I have seen in years.

Striking up a conversation with the cashier, I was sold on tasting the ruby red tomatoes that sell for $2.99 a pound. The saleswoman told me that they were the best tomatoes ever, and she described how they were grown by a local man who carefully starts his plants in January in a greenhouse on warming beds and provides the gorgeous globes starting in April. The woman said that her customers come from miles around to buy these tomatoes, which are expensive but evidently worth the cost. She assured me that I hadn’t lived until I had tasted one of these tomatoes, so I decided to buy one to eat right there. She rang it up and asked me if I wanted her salt shaker. “Sea salt,” she noted, “so it’s even better.” I accepted and I stood at the counter, shaking sea salt on to each bite of that luscious, perfect tomato.

We chatted as I ate. She told me about working in the farm stand greenhouse all winter long, and asked me about life aboard my ship. The woman informed me she had seen a reality TV program about people living aboard yachts, and they show how there’s no privacy and lots of drama. I said we have much less drama, but no more privacy.

Having eaten the red fruit, I told the woman that she was right; it was the most luscious best tomato ever. I collected my eggs and peaches and went happily on my way, glad that when I was pinched for time I decided to slow down instead of speed up.

4 Responses to When pinched for time, slow down