Fingerprints on the land 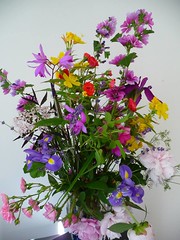 Ralph Waldo Emerson was right in his assertion that success includes, “To leave the world a bit better, whether by a healthy child, a garden patch…”

Last year as I winnowed my belongings when I downsized to “two bags and a smile,” I came across some papers and photos to return to my ex-husband. I dropped them off while he was at work, leaving them on the back stoop, for protection from sun and potential rain. This meant I had to walk through the backyard, which used to be my beautiful 1/4 acre permaculture garden, lush with fruit trees, cane fruits, berries, herbs, 10 raised vegetable beds, and laden with a diverse variety of perennial flowers. Sadly, little of it remains.

After our daughters and I moved out, my ex-husband cut down the Asian pear and one of the apple trees. He also removed the trellis with the hardy kiwi fruit, killed the passion vines, the huge wisteria that sheltered generations of robin nests, and nearly all of the flowers. He removed the clothesline, with its a trellis on one end, supporting a red climbing rose that is no longer. The sandbox is also gone. It had been full of perfect sandy clay loam soil after I turned it into a garden bed when the kids had outgrown the sand. The beds of bulbs and perennials are mowed down. The yard is nearly as empty as it was when we bought the house in 1991, the landscape hardly more than a plain of grass.

The morning after revisiting what was once my garden, I woke thinking about that piece of land and realized that while there I hadn’t even thought to take a picture of it in its current state. I wanted to remember it as the beautiful and magical place where pink cherry blossoms floated in a copper birdbath, tiny box turtles hatched, rabbits gave birth, robins multiplied, and children played among the flowers.

I also reflected on the great quantity of perennials I had given away in advance of moving. I hosted quite a few Subversive Garden Convergences, in which friends and total strangers took divisions of lilies, roses, daisies, echinacea, verbena, lily of the valley, hardy orchid, German- Dutch- and Japanese iris, columbine, winter jasmine, forsythia, daffodil, saffron crocus, and more! These are spread from Fredericksburg to West Virginia and all over northern Virginia. I remembered how those free perennial garden digs introduced gardeners to each other, preserved and propagated long loved plants, and even garnered me a few new friends.

I recalled that, as I had planted and tended the spacious yard, I saw evidence of its impact on local biodiversity. The rabbit population boomed, which brought hawks and owls to the neighborhood. Other birds came in, too, as well as snakes, turtles, dragonflies, butterflies, and bees and more beneficial insects.

I then thought of a garden I knew in my early years, owned and tended by a keeper named Dr. Culpepper. I remember him as an old man whose legs were slow and thick with elephantiasis, but who knew his flowers and talked about them as others speak of friends. Sometimes my mother would take us there to buy daffodils to share at church. I remember how I loved to explore the winding paths through his woods, and the delight of coming upon a patch of dahlias, camellias, kalmia, or other bright flowers. Dr. Culpepper had wanted his property to become a home for seniors after he died. It is that now, for low income elderly, and the name is Culpepper Garden. When my girls were little, I took them to Culpepper Garden one day, and found the old man’s fingerprints on the land. Out in the woods, away from the high rise building, the garden paths still wound, and the flowers bloomed as they had in my youth.

My ex-husband’s destruction of my garden was motivated by his need for simplicity, as well as to spite me and erase my mark on the property. But even in the barren lawn, I could see the outlines of the raised beds that I had carefully tended for 17 years, as I grew organic food to feed my family, so we could manage on one blue-collar paycheck. Interestingly, my ex had not mowed the alleyway behind the back fence, so it is grown rampant with day lilies, hibiscus, iris, and primrose. One of the dominant species in the alleyway is the elderberry that I planted from cuttings I made when the children were small. It seems that no matter how long I am gone from there, some fingerprint of mine will remain on that land.

A garden can be a metaphor for most things in life; we plant and tend, and time changes everything in the end. But we can keep the beautiful memories, can’t we?