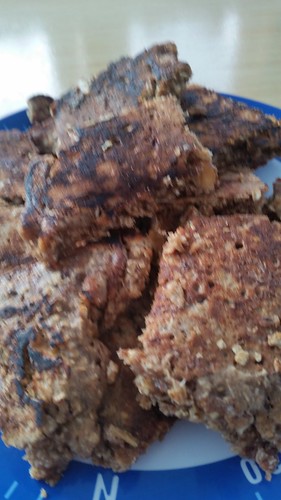 Although the 1,555 mile delivery of HEAVEN–a leaky, creaky, stinky, noisy, and unseaworthy Lagoon 42 catamaran–was greatly trying and a minor disaster, a few good things did come of it. Like the recipe for HEAVEN Under Tow USCG- Approved Bacon-Chipotle Stovetop Granola Bars.

So therrre I wuzzz*, aboard what amounted to a floating cocktail lounge, crewed by skipper Dave, Bob, Beth, and myself. It was Day 8 of the voyage. The day we lost the main sail, which is part of another story. Except for a few toasted almonds, the crew snack bag was empty. We had eaten the fresh and dried fruit, cookies, crackers, and granola bars that Dave and I had stocked while provisioning. This seemed to make Bob sad, and I like Bob, so, during my off watch I was determined to make something good out of whatever ingredients I could find.

The owners of the boat, a couple by the name Fearnow, are clearly not much into cooking. Their galley was poorly outfitted and meagerly stocked. No flour, no baking powder, no cocoa powder, few spices, and no sweetener but white sugar. However, they are apparently into oatmeal, because there were two cannisters of rolled oats. With that, I devised a recipe for skillet granola bars, made up with the limited ingredients found in the galley: rolled oats, eggs, sugar, the remaining nuts, and the cinnamon I had brought. Beth, Bob, and I had made a number of jokes about eating the piece of sargassum seaweed that Beth had plucked from the trampoline at the bow of the boat. So, just for fun, I also included a tiny piece of finely minced seaweed in the mix.

By the time I cut the bars and removed them from the pan, the cinnamon scent of the pan toasted treat filled the galley/saloon. I carried the plate down to Dave, who was working on his computer down in his cabin. The skipper looked up, clearly interested.
“What have you guys been doing?” Dave asked. “It smells great!”
“I made some skillet granola bars,” I replied. Dave gave me a suspictious look.
“Did you put seaweed in it?” he asked. I couldn’t lie, but I also couldn’t answer.
“Um…” I said.
“Then I’m not eating it!” our skipper proclaimed.
“It’s only a tiny-winy little pice, minced up fine, so you can’t even tell,” I offered.
“No.”

The bars were cake-like, mildly sweet and cinnamon-y good. Bob seemed quite happy with them, and I was glad we had enough of the ingredients, except the nuts, to make more as needed. The next opportunity arose on the day the Coast Guard rescued us.  Unfortunately, the howling wind and rough sea made the voyage to safe harbor arduous and frigid. Bob, Beth and I took short turns at the helm, each relieving another when the helmsman was chilled. 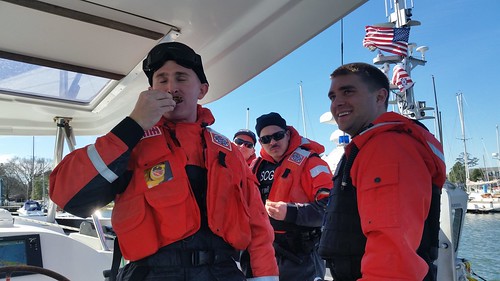 As soon as I went off watch, I hung up my foulies and warmed up by making a second batch of the skillet granola bars. This time I left out the milk for a less cake-like product, and with Bob’s encouragement, increased the sugar. Okay, I doubled the sugar. After the Coast Guard had us safely delivered to Cobb’s marina, I brought out the skillet granola bars, still warm, and shared them with the Coasties, who gave their approval and quickly ate them up with pleasure.

Poor Bob was disappointed the granola bars had disappeared, and he gently hinted that he would like it if I made another batch there at the dock. “There is some cooked bacon in the reefer,” he suggested, implying that bacon skillet granola bars would be good. I took the hint, and decided to also add some chipotle powder from the boat’s stores.

US Customs arrived right about then, and that bacon-chipotle smell enticed one of the officers to have a taste. It seemed Dave’s suspicion about seaweed kept him from tasting the latest recipe, but Beth, Bob, and I found them delicious. You can, too, because here is the recipe:

Mush all ingredients together in a medium bowl. Pour into hot, lightly oiled nonstick skillet. Lower heat and cook until it looks pretty good and smells yummy. Cut into squares and eat warm.