The flying fish of fate 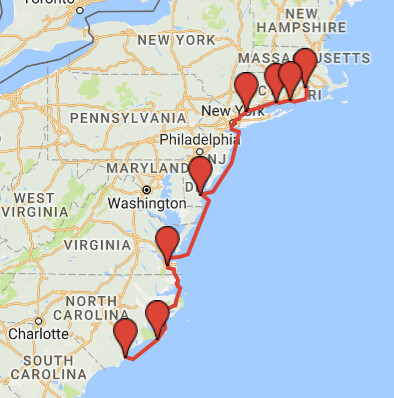 A year ago today I met a delightful elderly woman on the train when I traveled from Wilmington DE to Wilmington NC on my way to help with a private yacht transit to East Greenrich RI, over 800 miles away. I had decided to sit next to Addie when I walked down the aisle in the train car. Some other passengers next to open seats had sprawled their belongings across the adjoining cushion, were absorbed in their electronic devices, or offered unfriendly facial expressions. Addie was different, though. Her head was up, bright black eyes welcoming, her expression open. That made my choice for me. I asked Addie where she was headed. She told me she was going back to North Carolina, where she was from. Her children and a 7-year-old granddaughter, were there, and she planned to stay for weeks. She hoped to bring the girl back to NYC for a month or so this summer, to show her a world outside of small-town southern life.
She told me she was 68-years-old, her first job was in a chicken processing plant when she was 18, and she had made her life in New York City as a nursing aide. Addie said she had been married once, but found it to too much trouble to try to please a man, so she vows to never marry again. Addie said she wanted to go back to live in NC, but kept her N Y residency and house because of the access to medical care.

I wondered aloud how fast our train was going, pulled up Google Maps, and showed Addie the blue dot that was us, speeding along at 85 MPH. The earth view map showed the terrain, and we could almost simultaneously see the swampland through the window and on the map as if from space. My elderly companion’s reaction told me she had not seen a map app before.

Feeling ready for some lunch, I pulled a small bag of shelled sunflower seeds from my daypack. I offered to share them with Addie, but she declined.

“I could really go for a bit of chocolate,” she said wistfully. I brightened and pulled out the little bag of foil-wrapped dark chocolate pieces that my shipmate Ann had given me as part of a kind farewell gift when I took a break from KALMAR NYCKEL for the yacht transit.

As we enjoyed the chocolate, Addie asked me the reason I was going her home state. I told her about the upcoming yacht transit, in which I would crew aboard a beautiful Passport 43 for over 800 miles, from Wilmington NC to East Greenwich RI.

“Aren’t you afraid of being out there on the ocean?” my companion asked.
“No, I love it out there!,” I replied. “Last fall I spent 11-½ days on the ocean, aboard a smaller boat, with just one other person. We took turns, called watches, five hours on, five hours off, around the clock.” Addie’s eyes widened. “And we saw a whale! And, of course, flying fish…” The elderly woman’s expression was incredulous.
“What?” she asked, “Fish that can fly?”
“Yes!” I answered. “They can fly for an amazingly long time, and their fins make an indescribable sound as they go.” I pulled up the fabulous BBC video, “flying fish hunt”, so Addie could see for herself. I enjoyed watching her expression as she watched the video, which was clearly a window into a world she had not imagined.

Addie asked how I had become a sailor, and I gave her the thumbnail sketch: fell in love with sailing at age 10, sailed often in my youth, had owned two boats in my youth, always wanted to sail tall ships. I told her that a year-and-a-half earlier, I completed the transition to a sailor’s life, that I had sacrificed everything to follow my lifelong dream. I had quit my horrible job, fledged my children, fixed up my house, gave away my belongings, sold the house at a loss, and went off to live my lifelong dream of sailing tall ships. Addie and I continued to enjoy each other’s company on the rest of our train ride together. My stop came too soon.

“Addie,” I said, “I’m afraid it’s time for me to go. But it has been wonderful talking with you and getting to know you. I wish you all the best, and hope you have a wonderful time with your family.”

“Well,” she replied, “You taught me something important.” I looked at her, questioning. “I decided I’m going to do what you did,” she announced. “I’m going to get rid of that house, move back to Carolina, and live where I want to live!” Her face beamed, and I’m sure that mine did, too. Addie gave me a sweet and gentle hug. I kissed her cheek lightly, wished her all the best, and smiled the entire way to the stop where I was to catch my bus for the next leg of my journey.

Since that day, I cannot see or think of flying fish without also thinking of Addie, and the expression on her face when she had decided to chase her own flying fish of fate, to sacrifice everything to bring her dream alive. Here’s to you, brave Addie! May you long enjoy your life with family in North Carolina.