The catamaran from hell, continued 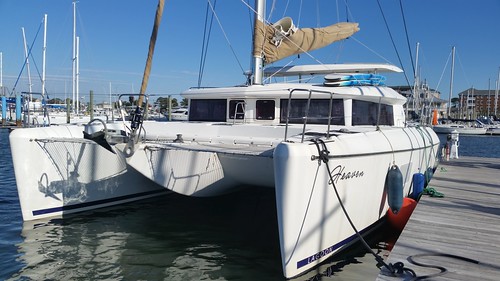 The US Coast Guard rescue should have been a happy ending to the catamaran from hell story, but the travail continued. This was rooted in skipper Dave’s sympathy for the owners, John and Kat, who had cited a family medical emergency as the reason they needed their liveaboard Lagoon 42 catamaran quickly moved from St. Thomas, US Virgin Islands, to Annapolis, Maryland. Once Dave had arrived in St. Thomas, the owners had soon flown out to Annapolis, so they could be close to their relative who needed care.

So therrre I wuzzz*, having survived an ordeal of special magnitude, and unaware there was more to come.

Having been towed to safe harbor at Cobb’s Marina by the USCG, our crew of four caught our collective breath, which included development of the amazing “HEAVEN Under Tow USCG-Approved  Bacon-Chipotle Stovetop Granola Bars.” We cleared US Customs, then skipper Dave treated his crew to lunch at Captain Groovy’s Seafood Grill. The food was delicious, servings generous, and it was a pleasure to have a hot meal that someone else cooked, sit on a surface that didn’t bounce, and use the spacious bathrooms with toilets that also did not bounce up and down. The four of us clinked our glasses in victory over the elements and the triumph over the boat. When I turned to Beth I started to laugh.

“You have the funniest eye makeup ever!” I noted. “Like white eye shadow, all the way around your eyes. It’s salt!” Beth looked at me and grinned before she answered.

“So do you!” she laughed in retort. I rubbed my eyes and laughed when felt the coarse dry salt on my own skin.

Back at the boat, Dave sent Bob up the mast in the bosun’s chair to check out the main halyard. If it could be retrieved and repaired, then we could easily motorsail the boat in decent weather. It turned out the halyard was not recoverable, so if we were to sail the boat on to Annapolis, we would need particular wind speed and direction. Bob and Beth generously helped with a lot of getting the boat stored away before they left. The two had to go home to their real lives in North Carolina, lives with regular jobs, commutes, their own beds, and keys to front doors.

At Cobb’s Marina we took on diesel since the stuff in the Jerry cans on deck was suspect, having been bashed about when the owner’s lashing failed, and at least one can with a leak. The good folks at Cobb’s were exceedingly friendly and helpful.

That evening, I sinned. I think I used up the hot water at the marina. It seemed like that’s how much it took to wash off the salt crust from our 1,550 mile ocean voyage.

What respite it was to sleep aboard a quiet boat, that was not then leaking or heaving up and down, and to sleep through the night, after that long chain of 4 a.m. watches. In the morning, our crew of two woke to a boat so cold that we could see our breath. I baked the rest of the bacon as an excuse to turn on the oven and heat the saloon a little.

Dave said the forecast was for winds from the West at about 15 KT during the day, which would be perfect for motorsailing up the bay. However, the wind was expected to clock around to North that evening.
“I’m not up for any more motoring against the wind in the cold in this crap boat,” I told my skipper. “If the wind changes, we’re going to anchor or tie up somewhere. Otherwise I’m taking my chances with a half inflated dinghy, a single oar, and rowing ashore!”

With the good forecast ahead, HEAVEN (or “HELL” as she should have been named) left the dock around 11:40 a.m. Dave and I figured we could effectively motorsail for most of the day and then put in at a marina when the wind changed. We got out of Little Creek and found the wind speed and direction were wrong, and the wind was too much for the one engine. We decided to anchor, have lunch, review options, and make a joint decision.

Dave wanted to wait half a day for the wind to lay down, then determine whether to go on toward Annapolis or go back to Little Creek. I agreed. The skipper was in email contact with the owners, who were completely unsympathetic to the situation.

John and Kat seemed to have no concern for what we had been through, or, perhaps they simply didn’t care. They had no appreciation for the fact that our crew had kept the boat moving despite its multiple failures, and the debilitating cold. They also were clueless about the impossibility of sailing a catamaran without a main and only one engine.

The owners did not acknowledge the large volume of free advice and tips Dave had given them regarding additional repairs to the former charter boat. wrote back to say they wanted us to stay aboard until the weather was expected to break, on Monday. The owners practically demanded we spend another two-and-a-half days, bouncing at anchor on a boat with no heat or hot water.

Dave was clearly a highly experienced skipper, who had been highly recommended by the owner’s friend, yet the owners suggested their boat’s leaky sail drive had broken due to our letting a line wrap around it, and that the heads were backfilling because we did not know how to use them.

Dave wrote back to John and Kat, telling them that he needed them to square up for services rendered so far, before going forward with other and likely different plans. His letter requested payment by credit card by 9 am the following day.

It was 29F in the warmest part of the boat, where we had the oven running, and 26F in the cabins, so we had to stay under our down sleeping bags.

I checked the battery charge and anchor swing, then hunkered down in my sleeping bag to attempt a nap, as we had agreed to 4-hour anchor/battery watches through the night.

In the evening, Dave came up to the saloon, where he worked on his computer, and made calls to repair yards, Towboat US, and rental car companies. While he worked, I made up a pot of beans and rice for dinner, using of the remaining carrots and celery, as well as a can of diced tomatoes, a palmful of faded dry cilantro, basil, and a couple pinches of chipotle pepper, and grated a bit of cheese for a topping.

Meanwhile, skipper Dave conducted hours of research and made personal contacts to lay out repair yard options for the owners. He was cordial, sympathetic to their situation, and firm in stating his needs. He had rendered service well beyond what anyone expected, in highly unpleasant and even dangerous conditions.

Dave told me he had offered John and Kat a deferred payment plan due to the family issues. Aside from the days of work, e had spent about $1,500 of his own money, which they had not yet reimbursed. The owners demanded significant additional accommodation from Dave, when they had not paid anything. They said they could not settle their account. Dave decided that if they had not met his request, we would leave in the morning, after he had the boat towed to the closest marina with a lift large enough to handle the catamaran, which has a 24.5’ beam.

Through the night the disabled floating cocktail lounge of a boat bounced, creaked, and groaned. The wind howled, and the water punched at the boat like a giant’s fist. Sleep was a challenge, and I’m not sure when I was happier to see morning light. Fortunately, the anchor and battery held, so at least we were safe.

At 6:30 a.m., the Norfolk Towboat US captain, Byron, called to say he was up and starting to move. He told Dave he’d gone out to the jetty last night to see where we were. He called again about an hour later, to say he was on his way. Dave and I suited up in all our cold weather gear. Because the outdoor temperature was painfully cold.

My hands were so painful from the cold that I wanted to cry. But crying takes energy, and I needed to use all I had to help us get out of there, so I refused to cry. By the time we were under tow and I tried to put the anchor bridle back in the locker, my fingers did not work. I could only pick up the coiled line by using my hand like a claw to hook and lift. I could not understand how Byron could work as he was, with no gloves. As soon as I could, I ran back to the galley to thaw me fingers at the oven door. Dave hailed Byron on the radio.
“Do you want us to do anything?” he asked, since the USCG had wanted a helmsman to keep the boat directly behind theirs.

“No,” the Towboat operator replied, “Just sit back and enjoy the riiiiide,” he crooned, with a humorous uplift at the last word.

It wasn’t a bad ride, compared to all we had been through before. We were out of the wind and spray, at least. I could make warm drinks and sip them, while doing nothing. I had run out of tea, so I tried the Lipton that the owners had left aboard. It was undrinkable. So, I put some Hershey kisses into a pan, covered them with milk from a can, and stuck the bowl in the oven to melt and mix. About the time it was ready to pour, we neared Bluewater Yacht Center in Hampton, VA, where we needed to raft up with the towboat so he could help us dock. There were at least four people and a dog at the dock to help. Evidently, they’d heard about our rescue. It seemed everyone had, even a sailing friend in Texas.

Once we were tied up, Dave treated me to lunch at the marina’s Surf Rider restaurant. All I wanted was a bloody Mary with horseradish and extra spice (plus capers and seaweed, which, of course, they didn’t have), and raw Chincoteague oysters, the best!

Well fed, Dave and I cleaned up the boat, packed up, and hit the road in the car he had arranged to rent. We arrived at Dave’s around 10pm. His wife, Janet, had the fire going for us. She showed me the guest room and poured a glass of wine for me. My hosts told me I could take a shower, or a jacuzzi bath, or both. I let that idea soak in as I stood in front of the fireplace, sipped wine, chatted with Dave and Janet, and felt grateful for their kindness and the the sensation of stillness.

2 Responses to The catamaran from hell, continued