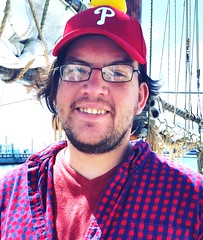 If you are lucky, perhaps once in your life the combination of a beautiful day, an unusually good mood, a snap decision based on a moment’s recognition of another’s struggle, and the inclination to trust the kindness of a stranger can turn a chance encounter into something special. This happened the day I met J.B. Parkes, BSDM, in Philadelphia.
I was walking the mile back to me ship from the laundromat, and my mesh bag of clean, folded laundry seemingly heavier each block. As I made my way down the brick sidewalk along Pine Street, I shifted the load from my arm to the top of my head. Moments later, I heard a voice from over my left shoulder.

“Would you like help carrying your laundry?” the voice said. I stopped, and turned to see a young man on one of the city’s blue Indego bike share bicycles. He wore square framed glasses and blue checked shirt. Wisps of dark hair poked out from beneath a red Philadelphia Phillies baseball cap, and his face was adorned with a black “scruffy look” beard.

At first, I could not believe a young person would make such an offer with honesty. For a second, I wondered if he wanted to steal my clean laundry, but that didn’t make any sense. The young man’s face was earnest and open, and I believed his offer to help was genuine, though I could not understand why.

I accepted his offer, he put the laundry bag on the front basket of the bicycle, walked along with me, and only then asked where I was headed. I told him I was going to the waterfront, and he said that’s where he was going, to play chess with random strangers in the park until his friends arrived for their scheduled meet-up. I thought maybe he was a kindred spirit, the sort of person who enjoys meeting people in unconventional ways.

As we walked, the young man and I got to know each other a little. He told me that he works for a financial planning software developer in the city, and I told him that I work aboard a tall ship that would be in port for a few days. As we waited for the light to change to cross S. Christopher Columbus Blvd., we introduced ourselves over a handshake, and I learned that he goes by the name J.B.

J.B. and I chatted the rest of the way to the ship, and I offered him a deck tour, which he gladly accepted, though he wanted to return the rental bike to the rack first. His errand gave me time to double check with the mate about the deck tour, and to stow my bag of laundry below.

When J.B. returned, I showed him around the ship, offered some facts and history, and introduced him to my shipmates at hand. This perhaps 20-minute exchange showed J.B. to be playful, intellectual, and culturally literate. My shipmates liked him, too.

Soon, me ship was readying to get under way for a public day sail, and J.B. had to go meet his friends. I gave him a hug, my thanks, my card, and asked him to send info about the software company where he works.

The two of us struck up a conversation by text. I referred to him as my “laundry mule,” and asked what had made him spontaneously offer help to a stranger. J.B. observed that he was not the mule, the bike was–since it carried the load. He said that he helped “because it seemed interesting,” and that he was “bored and hate that feeling of needing to adjust a heavy load.”

Before long we arranged for the laundry mule driver to come hang out with me mateys aboard our ship. On the appointed evening, J.B. arrived with a box of gourmet chocolates from the historic Shane Confectionery and a package of 11 beers. He explained that one beer was missing because he had given it to the clerk at the candy store, since she said she was looking forward to going home to have a cold beer. Me shipmates and I loved that glimpse into J.B.’s way of living.

That night, there was the singing of the Rocky Horror Picture tunes, the drinking of whiskey with beer chasers, the eating of fine chocolate, the 3-round arm wrestling challenge, the puppy cuddling and Shiba Inu rubbing, sea shanty singing, sidewalk shoulder massages, and many strange conversations. At one point, I asked J.B. again what had made him decide to offer help. I wanted to know the deeper reason underneath “I was bored” and “it seemed interesting.” J.B. said it was that moment, when he saw me shift my laundry bag from my arm to my head. He could tell I was struggling, remembered what that was like, and decided to lend a hand.

And that’s how one person’s recognition of another’s struggle, and the other’s inclination to trust the kindness of a stranger turned a chance encounter into the start of a fun and quirky friendship.