I was a teenage sex slave 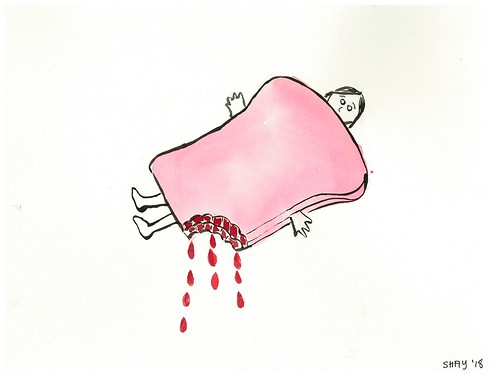 The moment I became a teenage sex slave. Each drop of blood signifies one month of that abuse. It began several weeks after my 15th birthday. A 25-year-old acquaintance, on hearing about my mother’s worsening mental illness and abuse, offered me a safe place to stay and said he could help me find a job. Instead, he tricked me into domestic and sexual slavery. He isolated me and used physical and psychological abuse to keep me under his control.

After grooming me for a few days, Stephen R. DeNutte of Manchester, NH, was satisfied that I was scared, needy, and vulnerable enough to make a good target for his perverse predatory predilections. My parents had prepared me well. Like the previous rapist, he came in the room while I was asleep and did what he wanted. He did not have to immobilize me because I was already petrified. I felt nothing.

He isolated me from any kind of support and constantly shamed, threatened, and coerced me. The sex slaver made me read pornography. He spat on me, humiliated me, shamed my body, physically forced me, and subjected me to physical restraints. He repeatedly told me, “You are my sex slave!” He also gave me alcohol and pot. However, after a while, he told me I was not allowed to drink anymore because “You like it too much.” I did like it! It was a temporary escape from the nightmare of my reality. An escape he did not want me to have.  Like my first abuser, he enjoyed making me the recipient of torture, but his mode was far more caclulated, protracted, and repetitive. It was as if he designed it for maximum terror, to keep me on the edge of death as long as possible.

When I found my fight and began to resist, he pinned me face down and twisted my arm behind my back until my elbow made a loud “POP!” It hurt for months afterward.

His family and friends acted like it was normal, like he was just my boyfriend, like boyfriends do these things to their girlfriends. My mother never called the cops, CPS, or came to see me. She abandoned me to that slaver. In fact, she had actually trafficked me twice in the year before.

I didn’t go to Child Protective Services because they had placed someone I knew in a home where the foster father raped the child. It was safer to be raped by the predator I knew than the one with which the CPS roulette wheel might land me.

My relationship with the sex slaver was similar to the one I had with my father. He was cruel, contemptuous, controlling, had power over me, and enjoyed causing me pain and harm. I was miserable, but it felt familiar. If you’re going to be with a predator, it’s better to be with the one who isn’t your father.

As my strength to resist increased, the sex slaver realized I was no longer a good little victim. He told me to call my father and “go home.”

My father came to pick me up. He saw where I had been and with whom. He made it clear that whatever happened was my fault and I should shut up and pretend nothing was wrong. Also, he subjected me to his continued verbal and emotional abuse. I had no reference point of normalcy. I thought everything that happened was my fault and I deserved it. Because that’s what my environment reinforced every minute of every day. I suffered in silence as I went back to school and tried to function. But I felt like I had been through a kind of war I could not describe, like I was from a planet nobody could know.

Some months after my return to my father’s domain I became intensely suicidal and planned my death in detail. Only a small miracle caused me to quit that plan and swear to myself I would never take my own life.

I often shamed myself for not fighting the sex slaver when he pinned me, and for not escaping sooner. But recently I discovered it was actually a smart defense and not a character flaw. From Dr. Pat Ogden I learned that the “feign death response” is powered by the dorsal vagal system. When the dorsal vagal nerve is stimulated everything slows down. The body starts to shut down and the muscles go limp in response. When sympathetic tone drives the body in an unsustainable way, physiology demands some respite and it often comes in the form of shut-down. Dr. Ogden noted, “These instinctive responses are innate, but if we suffer from unresolved trauma we’ve usually formed habits like default defensive responses.”

Now I realize a part of me knew if I hadn’t frozen it probably would have made my perpetrator more violent. Instinctively I knew not to use any of the other defenses because he was bigger and stronger. Also, I now know that the shut-down response is my default when I’m overpowered or overwhelmed. My father set the pattern when I was very young. Looking back I can see that both of my parents prepared me for the year of slavery. It is a difficult reality to face. But I do it one breath at a time.