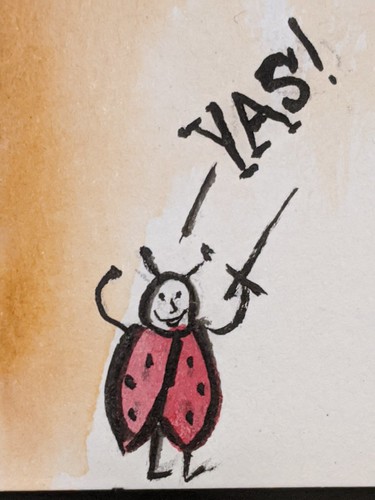 Della the Janked-Up Ladybug helped me launch my tiny-but-pointed #TraumaAwareAmerica initiative. It focuses on trauma awareness/education and the rights of traumatized people. I initially aimed at frontline providers, because they were the ones who could have greatly helped instead of putting me on the Trauma Train Express, like they have and do with countless others.

However, since the pandemic hit, my scope has widened to help everyday people understand pandemic stress is the first station on the Trauma Train Line and there are simple things we can do to stay off it or get off it sooner. It’s a lot easier to avoid or resolve trauma early than years or decades later, after it has set deeply.

My initiative is driven by the desire to prevent the kind of deep harm I experienced from #PsychologyAbuse. The “treatment” only greatly worsened my condition. And nobody is accountable by law. This is the same story for countless others, marginalized and exploited by the so-called mental health “care” system in America. A profits-oriented machine that all but ignores the number one health crisis in the world: Developmental Trauma. It is time for me to “Unleash the Ladybug!”

I’ve been studying the neurobiology of trauma for almost 6 years and find neuroscience is 20 years ahead of the rest of mainstream medicine and psychology. This puts the entire human population of the world at huge risk. We need to know this stuff now.
The doctors and psychologists are not going to swoop in. There is no rescue but us.