Who is Della the Janked-Up Ladybug?

Della the Janked-Up Ladybug™ is a fairly recent arrival to my art. I’m interested in the cartoon as a medium that offers a measure of safety to viewers, so they can take in something that might otherwise be overwhelming. My favorite example of this aspect of cartooning is the Art Spiegelman graphic novels, “Maus” and “Maus II” in which he uses cartoon characters to tell his father’s story of surviving the Holocaust concentration camps as a Jew.

Ladybugs have a personal meaning for me. I used to take time out of my workday to set free those trapped in the building when I worked in a highly abusive office. Being kind to a little ladybug in that cruel environment was a protest of the heart.

The concept for Della developed slowly. I previously used a ladybug as a central character in a painting because the creatures seem easy for humans to identify with, and yet far enough removed from human to be safe if, say, she gets smashed by The Flyswatters of Shame.

Della first appeared as an embellishment in a larger painting, sort of like the little comic strip “dingbat” or sidekick political cartoonist Pat Oliphant used, though his was a penguin. I decided to name her Della, short for Delaware, because this is my adopted home state, the ladybug the state insect, and this is the place where I was subjected to psychology abuse. The little creature so charms me I made her my mascot and will likely put her in comic strips to illustrate that Delaware is a commonwealth that doesn’t care about mental health or rights of those with mental health. 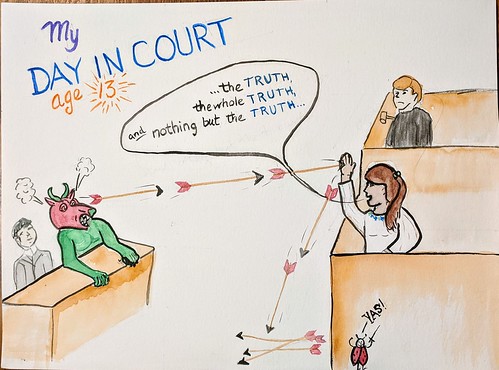 April 28, 2020: Della first appears as a “dingbat” at the bottom of “My Day in Court,” watercolor and mental hospital pencil. 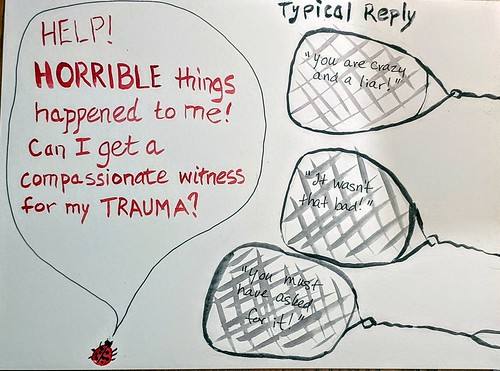 Della’s in the detail!

Nov 5, 2019: “The Fly Swatters of Shame.” Partially inspired by what I learned about shame from David Bedrick.
Consciously or not, denial, minimization, and blame are always intended to protect the speaker over the survivor. 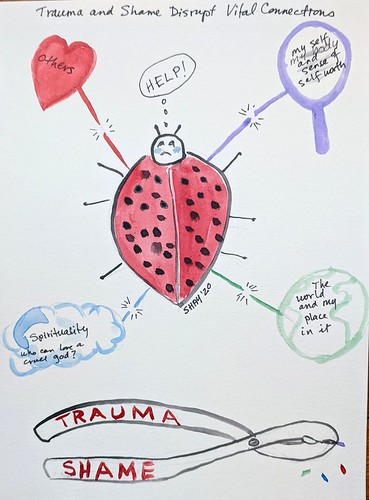 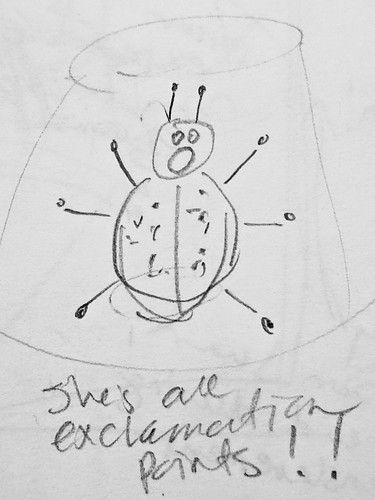 Mar 29, 2020: “I think I found my inner cartoon character.  She’s all exclamation points because that’s what life gave her. She’s going to go to the doctor for help with Complex PTSD from developmental trauma. Poor thing!”