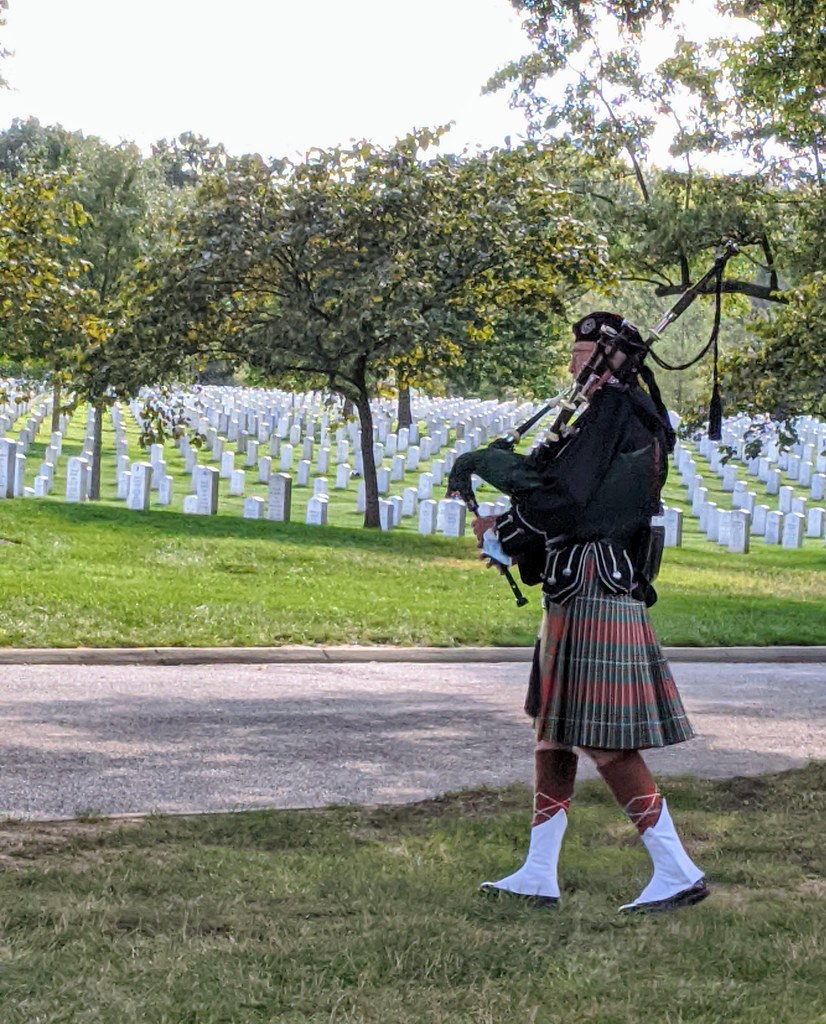 My father–whose behavior made him a monster to me–was buried with honors at Arlington National Cemetery in September. I spent weeks readying. I bought dress slacks, pulled together an outfit, worked through my fears, and intensively practiced three lines of “Amazing Grace” to sing during the ceremony. Still, I was unprepared for a shocking moment that could have ruined the day.

I kept my composure well through the surprisingly touching flag folding ceremony and after. But then the guns went off numerous times, CRACK! CRACK! CRACK! The rifle reports were too much for my nervous system. Their intense sharp sounds triggered my hyperacusis and audio-somatic synesthesia–symptoms of a hypervigilant brainstem–which sent me into RED ALERT! and opened the flashback floodgates. I tried to use the coping skills I’ve practiced for three years, which help calm my nervous system, but my hyper-vigilant brainstem did not comply.

My body started to shake and I quickly recognized I was unable to down-regulate by myself. I knew I desperately needed to co-regulate, so I sought my brother, who stood physically distanced behind me. We both wore face coverings so I asked if I could hold on to him because I needed some co-regulation. Of course he agreed.

I tried to attune myself to the calm of my brother’s nervous system as I also pendulated “ground, space, ease,” as my Alexander Technique instructor had reminded me. I held tight to my brother’s calm steady arm as I desperately worked to regulate. My body continued to shake and shudder and images, feelings, thoughts from the past swirled inside me. I focused on feeling my brother standing there for me, supporting me while I went through something horrible.

It didn’t occur to me that the piper would play “Amazing Grace” during the gathering. By then my system had settled and I regained my composure. After that discombobulation, I didn’t feel up to singing aloud, so I sang along quietly. My therapist has said imagining has the same effect on the nervous system as the real thing, so I imagined I belted out the song.

An older cousin read the eulogy he wrote. It was kind and moving. He choked up at the beginning and we all choked up with him. When he got to the part about how my father was such a good role model, had high moral standards, and taught my cousin and his brothers to fix cars, electricity, and other things, I was only slightly disoriented. The man he spoke of wasn’t the man I had known my entire life. I reminded myself that my cousin could be exceedingly magnanimous and that perhaps my father really did do those things for the boys in his life. He wasn’t cruel and contemptuous 100% of the time, and not to everybody. I also reminded myself that my father was the kind of man who would disinherit two of his children on the basis of sex. I sang “Amazing Grace” to myself again to ground myself.

When it came time to place a rose on the grave, I held my necklace with the portrait of Granddaddy, and silently recited modified lines from Jim Henson’s movie, “Labyrinth”: “Through dangers untold and hardships unnumbered I fought to take back the child you have stolen. You have no power over me!” In my mind I added, “Now you are in a marble box, going in the vault, in the dirt. You are a few handfuls of ash that can never hurt me or anyone else again!”

More recently, I told my therapist about this and other experiences of reconnecting with my brothers, their partners, and my nieces, and nephews. “It’s like I have a family!” I exclaimed.

“There are so many ways to be family that are f***** up,” my therapist reminded me. She suggested maybe it’s not that I feel like I have a family, but that I feel love. She’s right. It doesn’t feel like family; it feels like love.