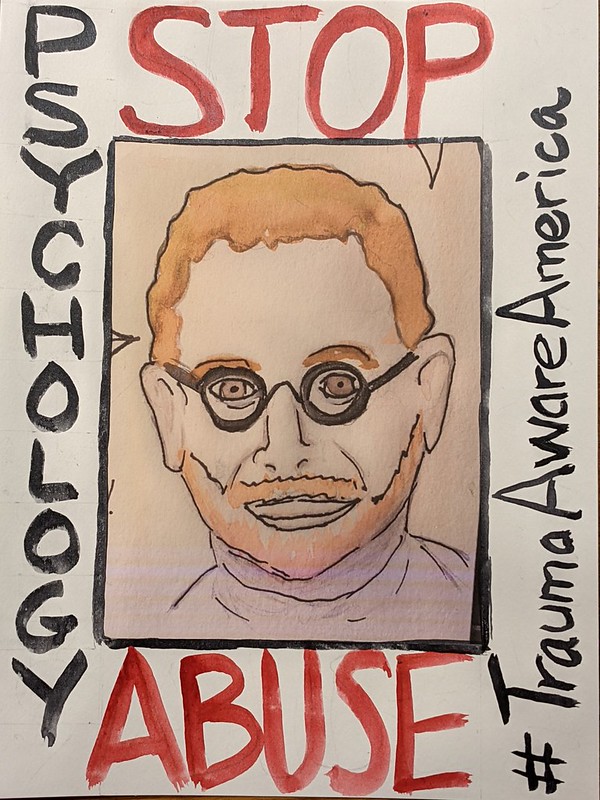 I write this on the third anniversary of our final office visit. You probably forgot that day. I have not. To refresh: my GAD was back up to critical, I told you I had increasing suicidal ideations and thought it was from the Lexapro, I’d had a disturbing interaction with one of my abusive parents, I had cut myself again, and I had called to find out what happens to my IRA if I die. Your deeply neglectful and bizarre response was, “Isn’t that a normal question?”

You neglected a basic professional duty: conduct a suicide evaluation when a person said “suicidal ideations.” Twice! You weren’t curious at all. You blew me off. If you have even a fraction of a soul you should feel tremendous regret and shame for the way you treated me. Your contempt for me impeded your ability to help me. You betrayed my trust in you as a professional, as a psychologist, as a healthcare provider, as a human being. You gave me no care, only the CBT hammer of shame, along with lies and betrayal. You played an arrogant game with my life.

You are guilty of gross negligence, incompetence, and lack of education, motivation, effort, awareness, empathy, and understanding. You are exceptionally under-qualified for your job. But the system supports you. They even erased scads of emails for you. I bet it feels really good to have corporate and legal support as a benefit of being an educated and well-off white male, lesser beings be damned! Maybe it feels good because you think you got away with something, didn’t have to experience whatever words and feelings I would express to your face to hold you accountable for the harm you did to me.

Perhaps you experienced a few small repercussions because you had to meet with leadership and take some remedial training or something else totally lame, but clearly, you didn’t suffer. Not like I still suffer 3 years later. If you suffered like I do you wouldn’t be able to work or even enjoy things you enjoyed months before. You wouldn’t have income. You would still be struggling to recover from what somebody did to you out of their ignorance and arrogance.

I like to imagine my complaint to the licensing board made your butt pucker at least once. I doubt it though because a man who operates like you doesn’t seem to have a conscience. I guess you feel really special to have soooo much white male privilege that the entire system protects you at the expense of those you harm to the extent it will delete 2.5 years of patient portal emails between me and my providers. (If it smells like a cover-up it probably is a cover-up.)

To correct the misinformation you put in my record, there was no therapeutic process. There was no rapport. That was your imagination. The definition of rapport is, “a close and harmonious relationship in which the people or groups concerned understand each other’s feelings or ideas and communicate well.” It’s not communicating well when you change the treatment plan without telling the patient. Clearly, you had no understanding of my feelings, ideas, or needs.

If you had been capable of rapport you would have been able to understand what I was telling you and would have responded appropriately. Instead, you were focused on whatever was going on in your head. Your unprofessional and secret personal agenda superseded your ability to provide appropriate care. Not just an appropriate level of care, but appropriate care at all.

Whatever your motivation and reasoning, one thing is for certain: your piss-poor effectiveness as a practitioner of psychology is driven by your own brokenness. Your behavior is a clear indication of your own lack of safety and connection within yourself and your inability to connect or provide safety for others. In that regard I pity you because you’re pathetic, don’t even know what’s bothering you, are so cut off from yourself you have no clue why you do the things you do. You really need some trauma therapy yourself, I bet. Truly, a functional person wouldn’t treat somebody the way you treated me. So I pity you for what you are as much as I despise you.

Perhaps you should use your precious “filmstrip metaphor” to recognize where you could have made better choices. If not for your bad decisions I would be sailing my ship instead of writing lots and lots of letters and complaints. I would also not be empowering survivors to spot charlatans like you.

You don’t have to get your panties in a wad and whine about this letter to your corporate protector, though I expect you will. Mediocre white men are scared if they don’t get all the special treatment to which they believe they are entitled.

C************* gives you a secure, tho bland and uninspiring office. You’ve paid a price with part of your soul. You’re in a position that harms others, though you ostensibly went into it to help others. That must feel really awful inside. On a deeper level, perhaps part of you feels really bad, too, that you haven’t been able to resolve the issue with the person you harmed.

This is actually my gift to you, holding you accountable here. Telling my truth released my father from the predator-prey bond on his deathbed. This time telling the truth releases me from a similar bond: the kind of relationship that gave you power over me, power to determine my treatment, power to neglect your duties so deeply that I ended up in the Cuckoo’s Nest, and power to avoid virtually all accountability for your egregious behavior.

This is most likely my final communication with you. Not because it brings me resolution, but because the lack of resolution brings me to turn my attention toward the tools I have left. That is, telling my story to as wide an audience as possible in every way I can that might help people avoid being hurt the way you hurt me.

My big mistake was to expect you would actually want to help me and have my best interest at heart. I wish I’d never seen your bland milquetoast face and your ’70s “professor” jackets with elbow patches. I wish I’d understood I was dealing with a highly arrogant and ignorant person.

If you hadn’t put me on the Trauma Train Express to the Cuckoo’s Nest [Rockford Center for Behavioral Health destruction) and polypharmacy machine I’d have no idea just how f****** awful is our “mental health care” in America. I also would not have learned that Rockford is owned by a notorious company [Universal Health Services, UHS] that harms people for profit. I wouldn’t know what an awful system C************* is for anybody who’s been harmed by it. But I do know.

I choose to follow Maya Angelou’s advice, “Use that anger, yes. You write it. You paint it. You dance it. You march it. You vote it. You do everything about it. You talk it. Never stop talking it.” I will never stop talking it. In fact, I use your image as the poster child for bad psychology. Thanks to your egregious neglect and abuse I am now officially a trauma awareness activist-artist. I teach providers how to avoid harming patients, and teach survivors how they might recover from harm by providers. I take pride in what I did with what you did to me. I turned the horror, disgust, and rage into a force for positive change. POW!

I wish you the best of luck in reconnecting the parts of yourself that are broken off due to whatever trauma you haven’t recovered from, which causes you to so deeply harm others with so little regard or conscience.

*Name changed to protect the writer from further threats issued by C************* for speaking out about my lived experience. I use “Snortz” because the Psy.D. snorts at his patients instead of listening to them.