“Anger is a Secondary Emotion” 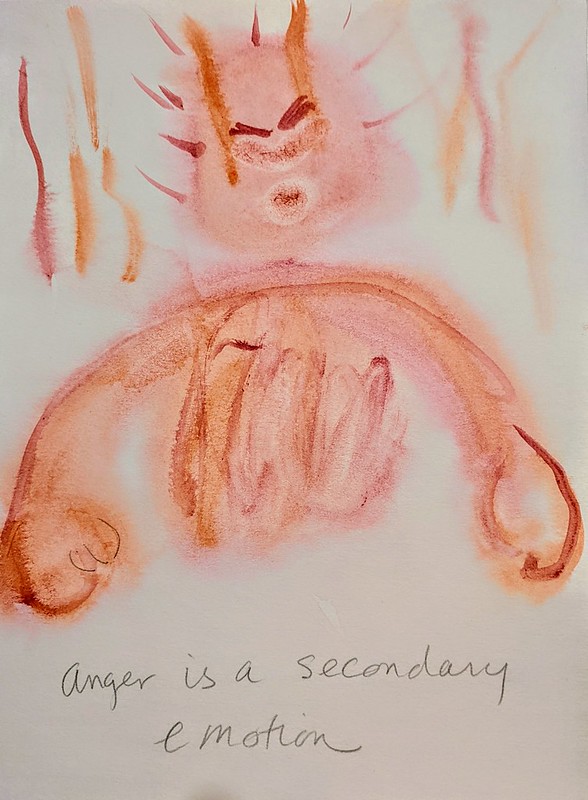 “Anger is a secondary emotion,” a watercolor I painted 3 years ago, about 3 weeks after my ordeal in the ER and mental hospital. Anger is often an indicator of a violation. This one was enormous.

Although I painted well earlier in life, I couldn’t even hold a brush after that stint in the Cuckoo’s Nest. Initially, I couldn’t make shapes, only splatter, drip, and smear. The psychology abuse I endured at Rockford Center for Behavioral Health degradation caused such a severe disruption to my nervous system it flattened me back to preschool.

I painted this with my hand. On the back I wrote, “Anger at being abused, at not being able to stop it, even as an adult.” I was still reeling from the outrageous maltreatment I received when I asked for help for Developmental Trauma.

When I asked for help, instead I received an initiation into the world of psychology abuse, in which vulnerable people are subjected to some of the various kinds of neglect and abuse the mainstream medical- psychology- pharmaceutical complex calls “treatment.”
The domination system of modern medicine and the pseudoscience of psychology subjected me to the same predator-prey dynamic in which I had been raised and subjected to severe maltreatment as a child. The system replicated the pattern of abuse from my childhood. It reinforced the damage.

Every provider I encountered was ignorant of Trauma-Informed Care (TIC) training, which is enough to cause severe harm to a trauma survivor, even from a provider with the best intentions.

In my week at Rockford I received no individual therapy and was forced to regularly ingest a pharmaceutical cocktail, one component of which was toxic to me.

I was also deprived of my rights and strip searched, which retraumatized me. I had been strip searched and digitally raped by US Customs as a child after my mother told me to smuggle plants into the country.

Some of Rockford’s abuses are recorded in the parent company’s recent $122M fraud settlement with the DOJ. This includes hoodwinking people into thinking they need to be there, and keeping them there when they don’t.

That alone is egregiously harmful and an outrageous violation of human rights. But this is SOP for Universal Health Services (UHS), America’s largest mental health hospital chain. This is what UHS does to 700,000 patients a year.

Meanwhile, Wall Street and the mental health profits industry applaud UHS for its continued ability to post a 30% profit, double the industry standard. Everybody wants to be like UHS. It doesn’t matter that they grind people into dust, suck the marrow from their bones, spit them out, and wait for them to come back for another round.

This is mental health care and justice in America. This is why I speak up, tell the horrific truth, and punch back however I can.